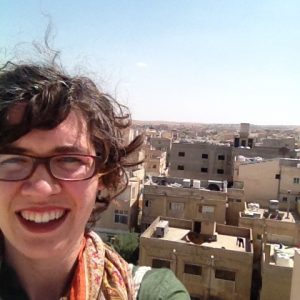 Recently, I was driving with my Dad, when we passed our new neighbour Amr (not his real name), a Syrian father of two, walking to work. Amr and his family arrived, via Lebanon, six months ago. He and my father have become good friends, bonding over home repair projects and impromptu English lessons. As the two men exchanged cheerful waves through the window, Dad mused out loud, “What a sad situation, to be starting over from scratch at his stage of life.”

It is undeniable. Amr’s situation is heartbreaking, and infuriatingly unjust. However, while recognising the truth of this, my response to my father was: “But he’s one of the lucky ones.” Amr has been given the opportunity to rebuild a life for his family.

It can be easy to paint all refugees with the same paint brush: forcibly displaced, enduring unimaginable loss of home, family, friends, dignity, property and wealth. However, my experience in Mafraq, a city in northern Jordan, earlier this year, exposed me to a different truth. The Syrians I met in Jordan face very different prospects than the Syrians who have arrived in Edinburgh. Resettled refugees—those who have been through the UNHCR resettlement process—are offered the opportunity to start afresh, hope for a stable and sustainable future. Whereas for those caught in the indefinite gap between displacement and resettlement, as is the case of most Syrians in Jordan, that hope can be difficult to attain.

When the war began, many Syrians simply walked across the Jordanian border and temporarily settled themselves in Jordan, waiting for calm and peace before they returned home. They are still waiting, and in the meantime thousands more have followed them. Initially, the border was not monitored, with the extend of the crisis yet to reveal itself, and therefore Syrian arrivals were not registered as refugees.

While in Mafraq, I was doing daily home visits to Syrian families. I saw their living conditions, heard their stories and received their hospitality. On one visit, I met a family whose patriarch had suffered a stroke. He was left incapacitated, unable to work and care for the family’s financial needs. The family does not have official status in Jordan, and are ineligible for resettlement. Effectively, this means there is no support for them, financial or medical. As a result, the eldest children, two girls ages 13 and 14, have left school to provide for the household. Twice a day they milk goats, which provides just enough income to keep a roof above their heads, but little else.

Unfortunately, this story is not unique. Many families are placed in exceedingly difficult situations either because they are caught outside the system, or are victims of the overwhelmed resettlement programme. Many of the families I visited had one or more mentally or physically disabled children. Their families exist day to day, the parents caring for them to the best of their abilities. Specialised care, physiotherapy, rehabilitation and medical attention are not available. If these families are not formally resettled where support will be provided, it is impossible to imagine what their futures hold.

For many of the Syrians in Jordan, it was evident that the country did not promise the hope of a sustainable future. They are unable to start the process of rebuilding a life, securing financial independence and education for their children. However, for many of them, there is no obvious second option. Whether they are unknown and struggling to be recognised by the system, or ineligible for resettlement for any of a variety of reasons, the Syrians I met in Jordan are living in a precarious situation.

Without exception, every Syrian I asked dreamed of being able to go home. However, many acknowledged that this seemed a distant hope, and hence their desire (for now) was to be resettled. However, unless the international community increases its commitment to receive Syrian refugees, many will be forced to remain in Jordan. There, they will continue to live without access to avenues of support, until it is safe to return to Syria.

My father’s observation was accurate. The extreme loss Amr has endured is tragic. And he faces a long journey as he builds a life for himself and his young family in a foreign country, with unfamiliar food, weather and customs, and a language barrier that keeps him from fully integrating. However, his resettlement offers stability and hope for a life rebuilt. For the thousands of displaced Syrians caught in the liminal space between leaving home and arriving at the end of their resettlement journey, that hope can be harder to grasp.

Claire Meghan has volunteered with our Edinburgh Weekend Club team.  The Weekend Club is a project of Scottish Faiths Action for Refugees which seeks to respond to the social isolation experienced by many refugees, asylum seekers and new migrants (New Scots) arriving in Scotland. Its aim is to enable New Scots to become active members of society through the building of strong social relationships. By providing a relaxed and fun environment at a series of social events the Edinburgh Weekend Club gives its participants the opportunity to meet new people, build friendships, improve their English and learn more about Scottish culture and history.